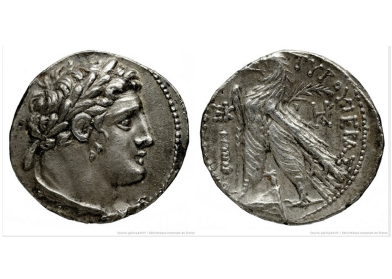 Tyrian shekels or tetradrachmas were large silver coins that originated in ancient Greece. Over time the tetradrachm effectively became the standard coin of the antiquity, spreading well beyond the borders of the Greek World. The coins minted in Tyre bore the likeness of the Phoenician god Melqart, who the Greeks and the Romans identified as Hercules.
Tyrian shekels, like this one minted around 102 to 101 BCE, were used by Jews to pay the temple tax in Jerusalem to subsidized the  sacrifices and upkeep.