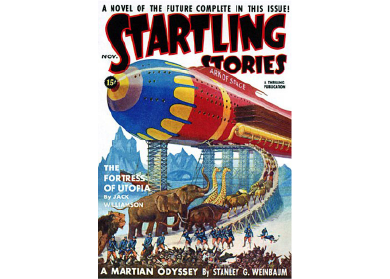 This image was the cover of science fiction pulp magazine Startling Stories (November 1939). The cover image was intended to illustrate the interior story, “The Fortress of Utopia” by Jack Williamson. The image clearly shows the adoption of biblical themes in science fiction, with animals shown boarding a spaceship two-by-two. But Williamson’s story does not contain an actual ark. Rather, by the end of the story, the entire planet becomes an ark that can leave its orbit and transport all life out of harm’s way.