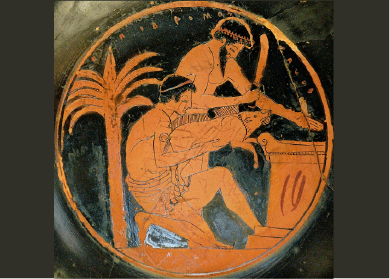 Sacrifice of a young boar, with kalos inscription. Tondo from an Attic red-figure cup, ca. 510 BC–500 BC. Louvre Museum, Paris.

Red-figure vase painting is one of the most important styles of Greek vase painting.
It developed in Attica around 520 BCE. This is a round painting from the bottom of a cup used for symposium. The Greek symposium was a key Hellenic social institution. It was a gathering for men of respected families to eat, drink, and be entertained. Symposium cups were often painted with scenes from mythology or with scenes of revelry and drinking. They were often inscribed with a kalos or a praise statement (e.g., Epidromos is beautiful). Since few vase painters signed their work, they are often referred to by the kalos name most often found on their work.