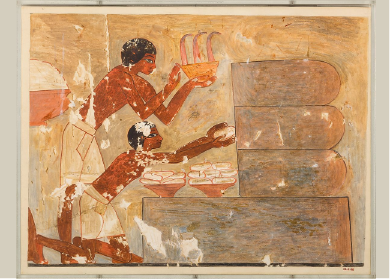 Nina and Norman de Garis Davies were two of the most influential artists/epigraphers devoted to recording Egyptian wall paintings in the first half of the twentieth century. They married in 1907, and when Norman was offered employment as the head of the graphic section of the Metropolitan Museum of Art’s expedition to Egypt, they settled in Thebes and began documenting tomb paintings. In the early twentieth century, color facsimiles were the only way of representing polychromy as color photography did not become common or reliable until the mid-century. The Davies used egg tempera instead of the more commonly used watercolor which made their paintings more accurate. The Tomb of Rekhmire was one of the last tombs they recorded. Rekhmire served as vizier and governor of Thebes during the reigns of Tuthmosis III and Amenhotep II. This image of two beekeepers gathering honey is in the section depicting the delivery of goods into the Treasury of Amun. A kneeling man is working to remove the honeycombs that he stacks up on two dishes, while his assistant smokes the bees.