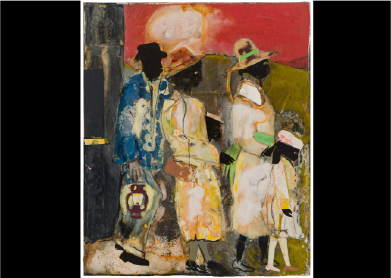 African American collage artist and painter Romare Bearden was born in the American South but lived most of his life in New York City. After working several decades as a painter, Bearden found his own voice by creating collages made of cut and torn photographs found in popular magazines. The artist’s subject matter included jazz and blues musicians, trains, migration, the rural South, and African-American religion and spirituality. This piece from late in his career continues his engagement with African Americans in the southern states—particularly their families, faith, and livelihoods.