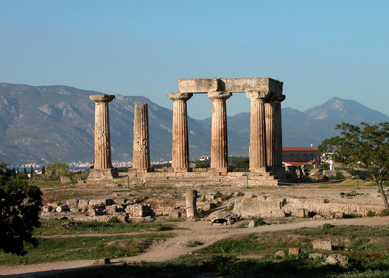 Remains of “Temple E” at Corinth. Photograph by Todd Bolen.

Located on the isthmus that joins mainland Greece to the Peloponnesus, Corinth was one of the most prosperous and economically diverse cities in the ancient Greek and Roman empires. In 1896, the American School of Classical Studies in Athens began a systematic excavation of the ancient city that has continued more or less uninterrupted into present day. This photograph shows the remains of so-called Temple E, located to the west of the Forum. There were two major components of Temple E: a temple and surrounding porticoes built in at least two phases. The deity to whom Temple E is dedicated is unknown.